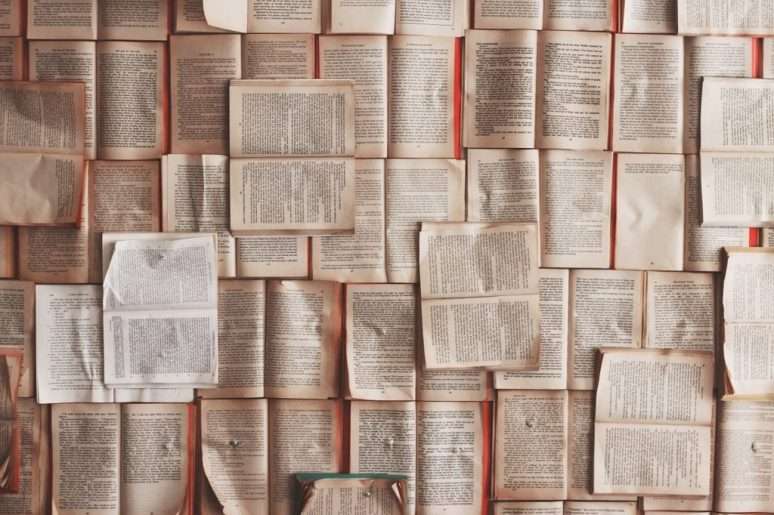 Facebook Carousel Ads have become a very popular ad unit recently. Advertisers are loving the ability to engage the audience with more than one ad message in a single interaction and allow them to see multiple sides of the product or service being advertised.

One of the more common questions I get asked around Carousel Ads is: “What should we put in the Carousel Ads and can you send us some examples?”.

There are some pretty quick things that pop to mind. It’s easy to create a series of images that are basically just single image ads lumped together. Your audience can see the features or benefits as you would normally lay them out, but altogether instead of separate.

Personally, I’m a fan of taking the Facebook Carousel Ads a bit further and using a bit of storytelling to get messages across. It doesn’t have to be a traditional start to finish story, but rather use a bit more magic than “I put five of my regular Facebook Ads together to create one super Facebook Ad!”. These aren’t lion bots people.

So I thought in the spirit of ‘sharing is caring’, I would go ahead and put my thoughts down on this virtual paper for all to see. Here are eight Facebook Carousel Ads examples with some form of storytelling I have seen and/or used that you can start creating and testing today.

Series of Testimonials, Ratings, or Feedback

One of the most compelling messages to use in advertising these days is not something you cooked up in your ad copy generator, but rather the social proof that what you’re selling is indeed worth the audience’s time, money, and attention.

For the video game ad example below, the rating you receive from each of the different popular review sites give can each become a card in your Carousel. For those that don’t promote video games, think of seller ratings or star reviews on review sites. These tell a compelling story of industry acceptance, as long as those reviews are made from sites people trust. 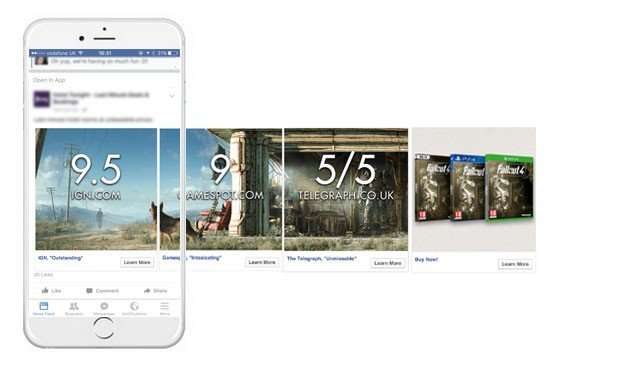 It can be pretty easy to take a similar approach with testimonials. Use candid feedback from your customer base to show the user what your customers think about you. Take the testimonial information you have on your site or on a review site and start putting together a choreographed message from one card to the next. 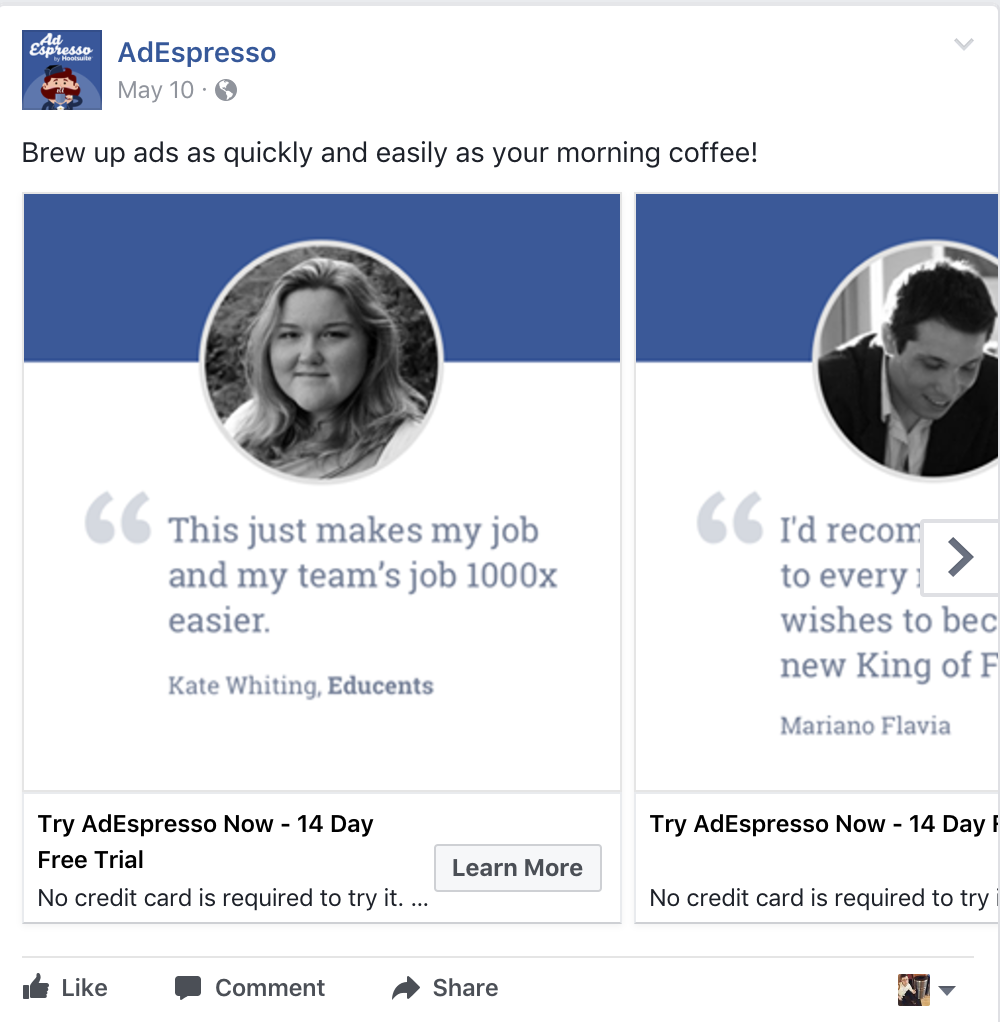 A Day in the Life

Depending on the product or service being advertised, it may be of benefit to show how it incorporates itself into the entirety of someone’s day. This version of a Facebook Carousel Ads allows you to not only show the user what you’re selling but give them a glimpse of how it will affect them as the day goes on.

I’ve seen this work well for new software as a service (SaaS) products trying to permeate the market. Many of these companies are working to convince users of their value in many areas of life rather than just one. Or that they are the one stop solution for all issues arising in a certain area of your life (work, exercise, etc.). For these SaaS offerings, it’s important to paint a picture of all the ways (or the most important few) you’re going to impact someone’s day from start to finish. 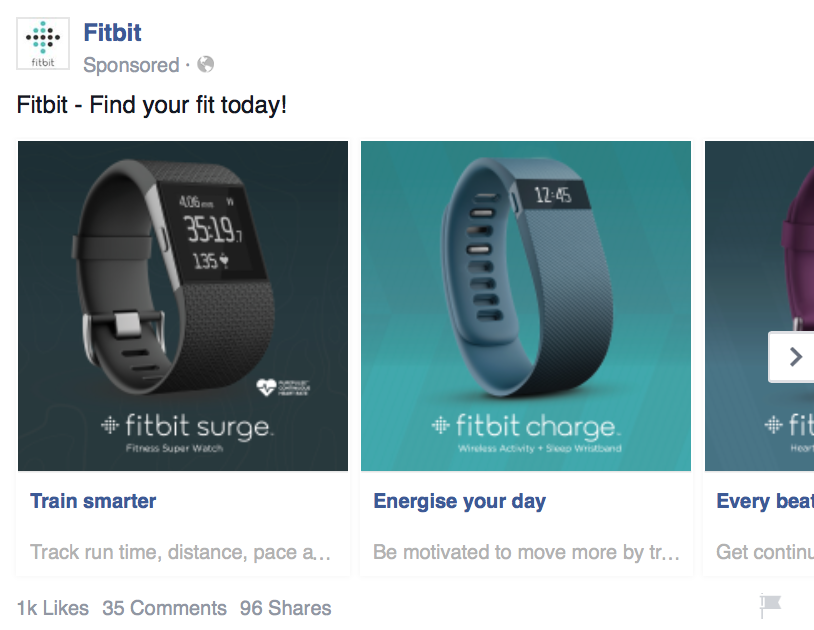 Now think of a series of images that shows you how Fitbit can impact your whole day from start to finish:

Now, this new day in the life look might not necessarily outperform the standard catalog type view of the ad I found, but it goes beyond showing off the different product models. It places the emphasis on the user of a Fitbit and how that little gadget can impact many different aspects of your typical day and tell a compelling story.

Highly Detailed Look at One Product

The most common example users see when searching for inspiration about Facebook Carousel Ads will most likely be this shoe. 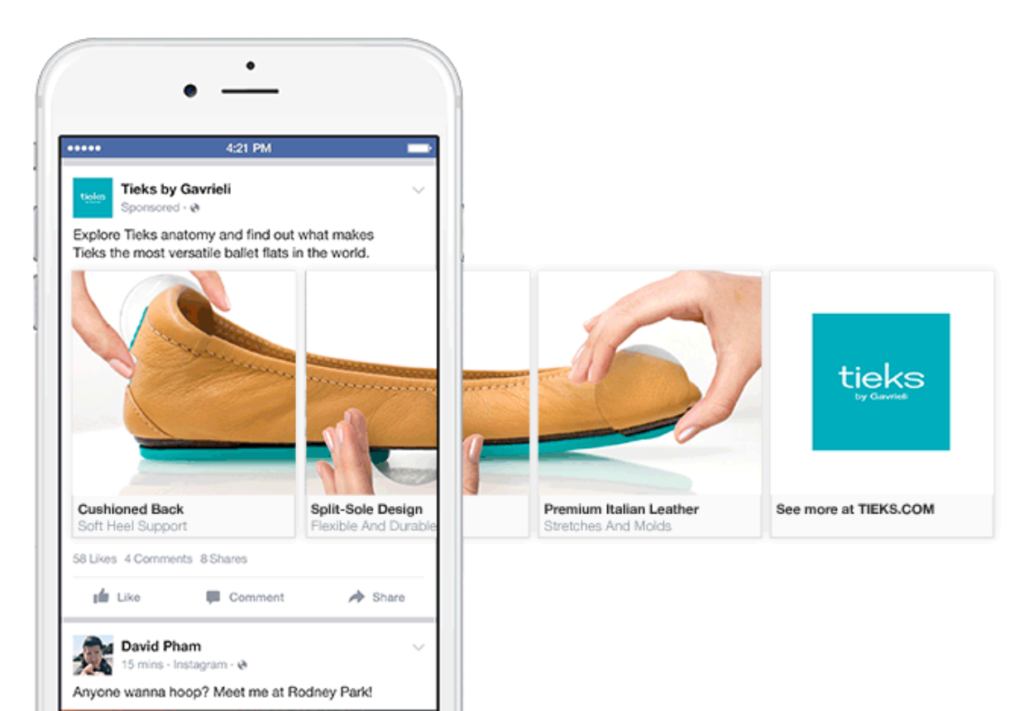 And that’s for good reason. It’s eye catching in the sense that it’s a single shoe taking up space that has to run off the edge of your screen. Not a common thing on Facebook at the moment.

Additionally, the way those mysterious hands are analyzing the ballet flat is not only showing off the product itself, but also conveying that Tieks has focused on putting together a well-built shoe and they’re not afraid to show it off.

How many other product manufacturers to you know will make their relatively small product nearly life sized through ad variants, then put magnifying glasses (albeit weak ones) up next to their product to show how it’s built?

Not too many in my estimation.

This ad does fall into a product focused set of visuals, but the visuals are meant to convey a story of craftsmanship and quality that a standard ad, potentially similar to the Fitbit example above, aren’t getting into for sake of showing more models. Tieks could have easily created each card to show a different color or model of ballet flat, but instead, they shifted the focus on to the quality of the flat, not their product catalog.

Parts of a Larger Whole

In a similar fashion to the image above, I’m a fan of when advertisers of larger products break them down into their individual components.

One of the easiest examples to find here is around car manufacturer Mini. 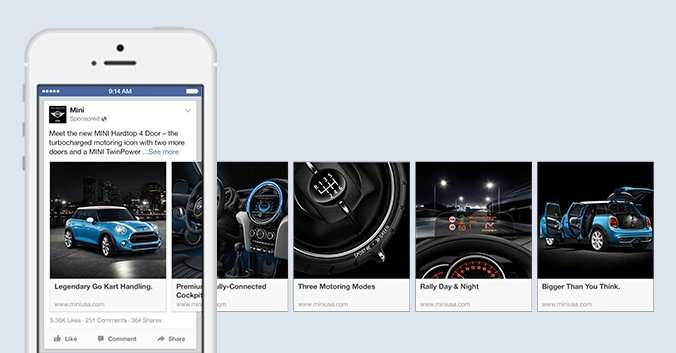 In the ad above, they showcase individual aspects of the car while not needing to show the entire car in every photo. It’s also pretty clearly designed for the average car driver and not those that are card carrying gear-heads. The images being shown reflect the basic features everyday drivers experience the most. They highlight simple usability and driving experience: steering wheel, Tron-like dashboard, heads up display, and look at all the doors!

But that’s clearly the audience they were going for.

If you’re intending to reach someone more focused on the practical usability (think someone trying to find the right truck to tow all of the stuff those folks tow), then the ad should be crafted to show them those features that are more important to them. What they are, I’m not entirely sure, but I see lots of trucks pulling big rocks up mountains. So maybe something more like that.

The point is, this image not only shows the individual aspects of a larger product but has chosen which portions to show you based on their typical customer. Most Mini customers aren’t looking at it for its torque or towing power. They want a car that’s cool, fun to drive, but also has enough usable space to fit their needs.

Show How to Use a Product

A great way to highlight exactly what you’re selling is to simply show the user how the product or service works. This is a good solution if your product or service is a new take on a previously existing product and might take some convincing to get people to switch over or if you’re trying to convey a level of ease that might seem unusual.

Take the ad below for example. Their messaging galls out “Beautiful Curls in 10 minutes or less!”. To which some might scoff. So in order to backup their claim, they show a series of 4 photos. At the end of which, the promised curls appear. 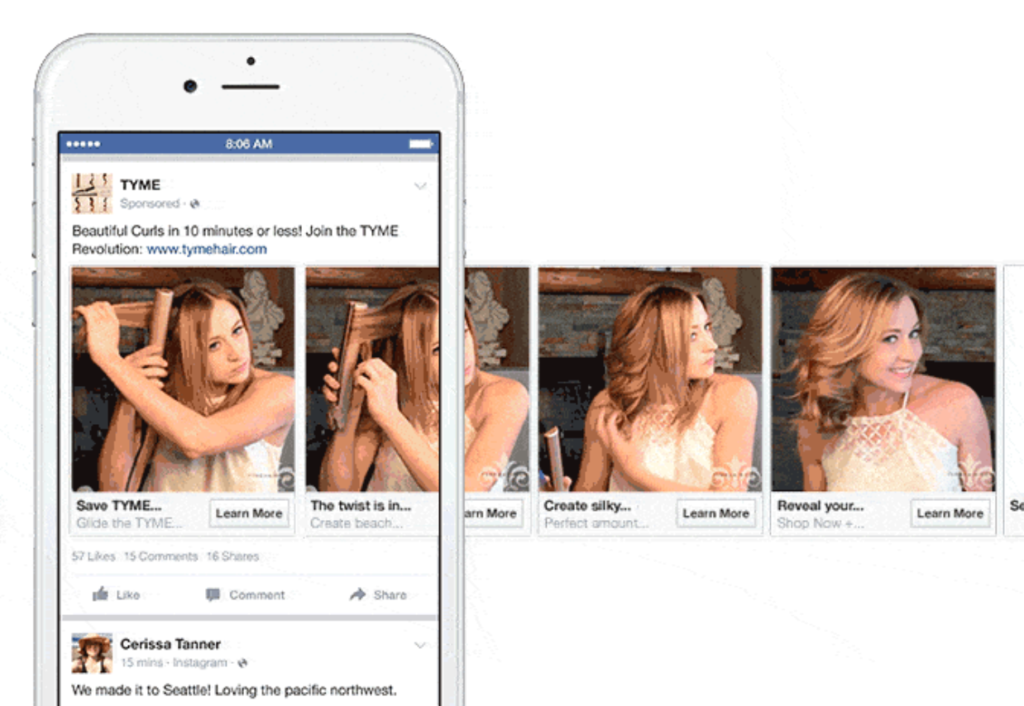 Although the example above isn’t necessarily a groundbreaking piece of technology, it does serve the purpose we’re looking for. From start to finish, it shows how easy it can be to get the results you’re looking for.

Using Facebook Carousel Ads to tell a standard customer’s story can be a compelling way to gain attention while people are scrolling through their newsfeed. This could mean finding one real-life customer that fits a common persona within your customer base and telling their actual story, or it could mean finding a standard persona and telling a fictionalized story (based on information from your real customer base, of course).

Rather than taking a small view like the “Day in the Life” model, look beyond a timeline and highlight the biggest impacts your product or service can make.

Start by setting the stage either by introducing the what the customer was doing before they found you or the problem they needed to be solved. Then utilize the Carousel ad format to walk through how their status quo was changed or how your product/service solved their problem. This strategy can take on nearly any portion of your business, large or small, but be sure you’re telling it from a customer’s point of view rather than simply in your brand voice.

It can be very impactful to have ads that say “Product X Changed My Life” instead of “Our Product X Can Change Your Life”.

The same way telling a customer story can be compelling, so can your brand story. Rather than highlight an individual product, show (and tell) the audience why you do what you do. What is the mission? Who do you help? What are the important cornerstones of your brand you want people to know about you?

These types of ads, depending on the product or service you’re selling might not be great for direct response sales, but could be a bigger benefit to brand building or being the first introduction point for a net new audience on a larger sale item. As millennials take a larger portion of the buying power, don’t ignore their desire for a more “real” connection with a brand.

Everyone loves a little suspense. Why not create some with a Carousel Ad?

If your product, service, story, or some other aspect you’re highlighting in your ad lends itself, set up a Carousel Ad that creates a sense of curiosity with the first image or two, then reveals something at the end. Or introduces the audience to a story in the first few images and then leaves a cliffhanger at the end.

Take the example below:

A TV show could create some pretty great teaser types of Carousel Ads. They could highlight individual episodes, the whole season, or simply set up an ongoing conflict.

Now, while all of us are not fortunate enough to advertise on television, the thought experiment could apply.

If you were going to make a commercial for your product or service in the vein of a TV or movie trailer, what would be in it? Who is your protagonist? Who is your antagonist? What’s the conflict? Do you have something to set up in one or two images that can be resolved in a couple more? Or that could entice someone to click through to a landing page for the resolution?

It might seem a bit far-fetched, but sometimes the best ideas come from stepping out of your reality and trying to come up with some outlandish ideas.

Storytelling can be an important piece of crafting creative for all ad units, but particularly Facebook Carousel Ads given their structure. Like the TV trailer idea, take some time and think about stories surrounding your product or service, no matter how specific or broad, and storyboard them to see how they might look as Carousel Ads.