Why Are My Text Ads Working So Well On Google Display?

I’ve made it a habit to include text ads in all my display campaigns and remarketing campaigns. My logic has always been that you want to be eligible for as many placements as possible and many publishers (looking at your About.com) still prefer to use text ad units because they blend into the content. But in the last couple months I’ve noticed particularly strong text ad performance. What gives?

This was announced back in August on the Inside AdSense blog with little fanfare. It didn’t even hit my radar. But it’s pretty cool. There were two main points:

Here is a sample of what they’ll look like: 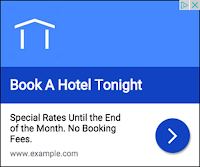 Perhaps the most interesting thing for me is how they pull in the image to accompany the text. A post from Wordstream indicates that they will only pull a logo from a certified G+ profile page. However, I have caught client ads in the wild where they borrowed the image portion from an existing remarketing image ad, so it appears that Google has broadened their reach on where they get images.

Unless you went to the trouble of opting out, your text ads on display and remarketing campaigns have been eligible for this. And in Apple-esque fashion, one more thing…

Display Text Ads On Mobile Are Richer Too

As of this December 7th, 2015 announcement, again on the Inside AdSense blog, they have rolled out similar changes to mobile ads. Here is what they’ll look like:

What Does This Mean For You?

For many advertisers this won’t be a big deal. Some will even like the idea that Google is putting some lipstick on their text ads. However, for brands with a company style guide (meaning they seriously want to control everything about how the brand is presented) this will likely produce some units that don’t stack up. Otherwise I think that most advertisers will get higher CTRs, Google will get more revenue and the world will keep on turning.